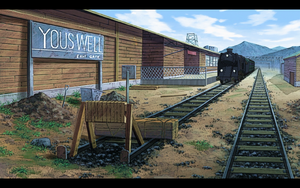 Youswell is a coal mining town in Eastern Amestrian frontier and the nearest inhabited area to the desert border. For some time, the land upon which the town and mines are built belongs to Lieutenant Yoki, who exploits the townspeople by frequently raising taxes while simultaneously lowering wages in order to line his own pockets. As such, though there are shops and inns for tourists and travelers to use, the prices are excessively high and there is a general distrust for military personnel among the villagers. The Fullmetal Alchemist is ordered into Youswell to inspect the coal mines and, after experiencing the plight of the citizens, purchases the land from Yoki and sells them to Halling, the mine foreman and proprietor of the town's primary inn.

Later in the manga, Youswell returns to the story in Chapter 32, when May Chang arrives from Xing and repairs a collapsed mine using Alkahestry, and once again in Chapter 80, when May reconsiders returning to Xing. In the 2009 anime most of the events are omitted except for the events from May's second visit to Youswell, though some of the dialogue is rewritten due to the previous omission.