Capable of using Alchemy and reforming his body (formerly)

To steal Edward Elric's body so he can become a human (formerly)
To revive Sloth by using the Philosopher's Stone in Alphonse's body (failed)
To reunite with his real mother, Izumi Curtis, at the Gate (Conqueror of Shamballa)

Nana Mizuki
Wrath (ラース, Rāsu?) is a young Homunculus created by Izumi Curtis in an attempt to revive her son. He is a character exclusive to the 2003 anime, not to be confused with the Wrath from the manga and Brotherhood.

Wrath is a boy ranging from twelve to fourteen-years-old, has pale skin, excluding his left leg and right arm, which belonged to Ed previously; violet eyes with slit pupils and shaggy black hair growing past the shoulders in back and growing down over the sides of the face, all the way to his collarbone in the front. He initially wore rags made from transmutated leaves, but was later given regular clothes by Izumi Curtis and later, is given an outfit similar to Envy's once he is fed red stones. This outfit consists of a black, sleeveless cropped shirt and tight, black short shorts. After Ed's stolen limbs are returned to their original owner, he is given automail limbs by Winry and Pinako Rockbell.

Initially, Wrath started out as a shy and timid young boy, staying in the shadows to avoid being spotted, but runs away if he is, but after meeting and staying with his mother Izumi and the Elric brothers, he's shown traits of a typical kid (i.e. curiosity, playful innocence). After being kidnapped by Envy (disguised as King Bradley), and being fed the red stones, he becomes a spiteful person, who openly declared his hate towards his mother for his "incomplete life", as well as chiding Edward for acting as God for attempting to resurrect his mother and at the same time derisively showing gratitude for giving him both an arm and leg, and lastly the ability to perform alchemy.

Out of all of the homunculi, Wrath felt a particular closeness to Sloth and thinks of her as his "mother" (presumably to not only reject but to replace Izumi), preferring to team up with her and he is quite protective of the latter as well. He's also shown to be vengeful to whomever harms her, as he did with Ed and Lust. After Sloth's death (partly because of his involuntary assistance), he became so desperate to have her revived several times, all attempts fail which eventually resulted in Dante summoning The Gate to deprive Wrath of his right arm and left leg. Wrath quickly turns over to Ed's side after realizing Dante's intentions, by distracting Envy as a chance for Edward to attack. He becomes shocked and is in disbelief when Ed was killed.

In Conqueror of Shamballa, Wrath was shown to be very depressed over Izumi's death, no longer thinking of Sloth as his "mother". During his final battle with Gluttony, Wrath finally admits that he has planned on sacrificing himself, showing a sense of humanity, while openly declaring that he wants neither Alphonse nor Ed to endure any more hardships; thus making the conscious decision to die while only wanting to be with Izumi.

Overall Wrath was just someone, who desired maternal warmth, only to find it with his mother/creator Izumi in the end. He also noticeably became distressed at the sound of crying infants, the most notable example being Rosé's child, which became one of his known weaknesses.

Wrath is a Homunculus, and thus has amazing powers of recuperation, strength, speed, and perpetual longevity; like his parents, even without alchemy, he possesses a strong form of martial arts which is obviously self-taught in that area as he relies mainly on some form of instinct and natural talent. Furthermore, while in possession of Edward's lost limbs, Wrath displays the ability to perform Alchemy without a transmutation circle - something which is unique to both Alchemists and Homunculi. But his particular Homunculus power is the ability to merge and fuse his body with virtually any matter, both living and inanimate, organic and inorganic, and he can even accelerate the speed in which he merges through the Alchemy he uses. He also has the ability to move his altered body parts like he did with Izumi's clothes to ensnare Alphonse.

Despite being a kid, Wrath was shown to hold his own from being attacked by a monstrous Gluttony (with the stones he ate), he also can fight fairly against battle-capable opponents like Edward, Alphonse, and Lust (both physically and alchemically). He also has demonstrated great endurance, taking the most amount of physical punishments out of all the homunculi.

All in all, it could be implied that Wrath could be one of the more powerful homunculi (alongside Envy, Lust and Pride) considering the fact that he can use alchemy which could be dangerous to the other homunculi, especially if he has their remains to his advantage (as he did with Lust.)

In the anime, Wrath is the Homunculus reincarnation of Izumi's son, who died at birth. After Izumi tried to resurrect him and saw that what had come back was not her child (or at least not entirely), Wrath was given to the Gate. Izumi later regretted her decision after hearing him cry and tried to reach him, but the gate closed before she could. Wrath spent much time inside the Gate, waiting and wanting to get out all while his body aged and the hate for the mother who had condemned him to the absolute darkness of the Gate grew. When the Gate opened while the Elric Brothers were trying to resurrect their mother, Wrath acquired both Edward's right arm and left leg.

Wrath states that long after, he opened the Gate himself, but for some reason could not remember who he was, and then lived on Yock Island, the same island where the Elric Brothers spent one month of Alchemy training many years prior. Following a quick battle with Izumi and the Elrics, he was forgiven by the former and was allowed to stay with the Curtis family. However, after being captured by the military and found by Envy, who fed him his first batch of Red Stones, Wrath joined the other Homunculi. As time went on, he began to think of Sloth as his mother.

When Sloth was being repeatedly slashed by Lust as a distraction so Ed could get his mother's body bone, Wrath appeared and snatched it, fusing it with himself. Wrath then reentered the house and stopped Lust from attacking 'mommy'. Sloth tried to run away, but Ed followed her. Wrath was about to follow them, but Lust stopped him. They fought until Wrath found the locket Edward had thrown to Lust previously. As with other Homunculi, Lust was paralyzed by being in close proximity to the body parts of the person intended to be revived (in this case a lock of hair attached to the locket). With this advantage, Wrath used his borrowed limbs to perform alchemy and killed her.

Later, Wrath went to save Sloth and fused himself with her so he would "never lose her". However, because he was still fused with Trisha's bone, his close contact paralyzed Sloth. Ed used alchemy to turn Sloth's liquid body into ethanol, causing her to evaporate around Wrath, severely burning half of his body (the part still fused) and leaving him heavily scarred.

Later, Izumi tried to convince Wrath to come with her. Wrath, insisting that Sloth was his real mother, refused and ran away. He didn't appear again until he, Dante, and Envy were inside the underground city. He begged for Dante and Envy to allow him to use the Philosopher's Stone to bring Sloth back to life. Envy refused and kicked him off repeatedly for his behavior. When Wrath appeared a short time later to try again, Dante opened the Gate with Rose's baby and had the Gate Children dismember Wrath's right arm and left leg (which originally belonged to Ed), taking away Wrath's alchemic abilities.

Upon losing his limbs, Wrath was left on the floor crying and bleeding in agony. He briefly assists Ed in his battle against Envy. When Ed was brought back to life, he asked Rose to take Wrath with her above ground. In the last episode, he was seen living in the Rockbell residence with Winry and Pinako with an automail arm and leg before running off.

He appeared in Fullmetal Alchemist the Movie: Conqueror of Shamballa. There, Winry found him in the forest near Izumi's grave, disheveled and despondent over her death. Noticing his automail was in severe disrepair, Winry took him back to the Rockbell residence for meals and maintenance. Wrath anticipated with Alphonse's intentions were when he came back after finding out that his brother was alive on the other side of the Gate. He led Alphonse to the Underground City, where they were attacked by a mutated Gluttony.

During their battle, Wrath lured Gluttony to a Transmutation Circle Al had drawn that would open the Gate and intentionally allowed himself to be bitten by Gluttony. He told Alphonse that he knew he was planning to sacrifice himself to bring his brother back and claimed that he never wanted to see anything like that again. Alphonse tried to argue, but Wrath told him that he wanted to go to his real home, where "Mommy" was. Alphonse went through with the transmutation and Wrath, in his untainted form with all his limbs, was greeted by Izumi in front of the Gate. He was last seen walking to his biological mother and embracing her before the gate closed.

He and Gluttony die at the same time and are the fifth and sixth Homunculi to die.

Wrath being spoken to by Sloth in the 46th episode,

Official artwork of Wrath from the 2003 anime Series.

All of Wrath's outfits. 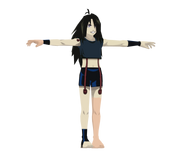