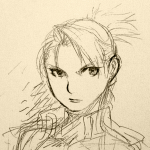 A major in International Relations at University of Brasília with emphasis in History and Diplomacy, Turdaëwen is a fan of many things considered geeky and nerdy including (but not limited to) Manga/Anime, RPGs and Comic Books. Student of multiple languages such as English, French, Spanish and Japanese, she's currently studing to become a civil servant.

She also takes great interest in Symbolic Systems, Mythology and Philosophy, subjects she studies and reseaches for over 10 years. She also teaches those same subjects, with emphasis on Classical and Platonic/Neoplatonic Philosophy, German Idealism, and also Greek, Egyptian and Celtic Mythologies/Symbology.

Some of her favorites writters of the field are Mircea Eliade, Joseph Campbell and the egyptologist Fernand Schwarz.

Contributions to the Fullmetal Alchemist Wikia

A fan of anime for almost 20 years, Turdaëwen took interest in the series of Fullmetal Alchemist (FMA) in the year of 2004, when she first watched the 2003 animated series. Intrigued by the changes along the course of the anime, she investigated to discover the manga followed a different plotline and, as she read the original material, she became an enthusiast of the author's (Hiromu Arakawa) work, following it closely ever since.

Her main concern in the FMA Wikia is the content's accuracy in face of the original work (the manga), as well as background information, provided by Hiromu Arakawa's interviews and the series' Guidebooks. She also takes great interest in providing information about inspirations and sources the series might have in the field of symbology and mythology, both declared and possible.

Since 2006, Turdaëwen has been working in several projects concerning Fullmetal Alchemist and Hiromu Arakawa. She was the main content editor and webinfo to the largest FMA portal in Portuguese, alchemistPROJECT, prior to its closure, in 2010; she has worked as a content consultant to several anime sites and was one of the main revisors to Fullmetal Alchemist: Brotherhood's fan translation to Portuguese.

Currently, Turdaewen writes articles about anime and manga to one of the biggest specialized magazines in Brazil, Neo Tokyo (by NewPOP Publisher), and owns the only active website dedicated exclusively to the work of Hiromu Arakawa, the Arakawa no Shrine. Her plan is to, in the future, expand the site to other languages. She also works as a consultant and revisor of Arakawa's works.

She recently started a campaign for expanding of legal distribution of manga and anime in Brazil.

My favorite pages in the FMA Wikia

Retrieved from "https://fma.fandom.com/wiki/User:Turdaewen?oldid=54109"
Community content is available under CC-BY-SA unless otherwise noted.