Raven was a Lieutenant General in the Amestrian Military and one of the elite members of Central High Command in the capital. General Raven makes his first appearance in Chapter 50 of the manga, while Colonel Roy Mustang contemplates how to go about using the information about King Bradley's true identity as a Homunculus.

Raven is a tall and broad-chested old man, with tanned skin and short white hair but gray or silver tinted beard and eyebrows. His typical outfit is the blue Amestrian State Military uniform.

While on his journey to Fort Briggs, he wore a brown overcoat, white scarf underneath, and gray gloves.

Role in the Story

At first it appears to Mustang that Raven can be trusted (the General's jovial nature and complimentary speech putting the nervous Colonel at ease) but when Mustang tests the waters by mentioning a rumor about the Führer being a Homunculus, Raven leads Roy into the Central Command room and repeats the rumor for all (including Bradley himself) to hear, revealing that all of Central Command is already entrenched in the malevolent machinations taking place in Amestris at Father's behest.

The Northern Wall of Briggs

Raven appears again in Chapter 67, arriving at Fort Briggs with a mysterious alchemist doctor in order to heal Solf J. Kimblee's wounds and hurry him back into action. During his inspection of the fort, the Elrics and Major General Olivier Armstrong conspire to trick Raven into revealing Central Command's plan involving the Homunculi and the Philosopher's Stone. Succumbing to Major General Armstrong's clever provocation and his own lechery, Raven lets out some dark secrets, mentioning to the Major General that the reality of invincible, immortal soldiers is within reach.

General Raven reveals the rest of the plan as he understands it to Major General Armstrong and offers her a place in Central High Command and in the new era of immortality if she complies. He orders that the soldiers of Briggs revive Sloth, place him back into the tunnel and seal up the entrance that the Homunculus had made (despite the fact that a search party had just been lost inside), telling them that the creature is actually a chimera under the control of Central Command on a secret mission. Raven speaks to Sloth and reminds him that Pride had given him a job and that he must continue to work diligently.

When Raven begins to speak to the Elric Brothers and then Armstrong about enduring the many menial trials and sacrifices for the glory of the new age within their grasp, the Major General finally realizes that Raven's hurried nature and veiled desperation to finish Father's plan is due to his age and the fear that he may die before immortality is granted to him. Having received all the information from him that she wished, Olivier Armstrong draws her sword against Raven and kills him, ordering that his body and her blood-stained gloves be mixed in with the cement being used to close up the hole leading to the tunnel. Raven dies aghast that Armstrong would turn her back on immortality when it's right in front of her. 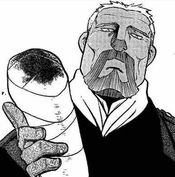 General Raven is a rather manipulative and selfish person, seduced by the plan for immortality, but too foolish to realize that he himself is being deceived and manipulated by the Homunculi. He speaks often of the "survival of the fittest" and the "end's justification of the means", suggesting that he no longer cares how many of his own people are murdered in the pursuit of immortality. As she slays him, Major General Armstrong notes that Raven may have been an honest and honorable soldier in his youth before the fear and greed of old age encroached upon his sense of duty to the Amestrian people.

Lieutenant General Grumman, in Chapter 63, reveals to Roy that when he was still serving in Central City, Raven had asked him whether he would be interested in a world of immortal soldiers. When Grumman had turned down the offer, asserting that immortality was not a thing to be chased after, he was transferred away to the Eastern Headquarters and never called back to Central, presumably so as to be kept out of the way of the plan.

One of Roy's informants in Central City also reveals that Raven is lecherous and conceited, further cementing his selfishness. Moreover, it's possible to conclude that Raven is an unfaithful husband since he has a wife, revealed in episode 24 from the anime adaptation.