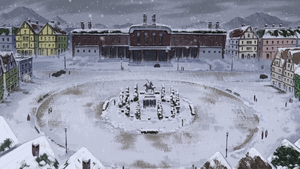 North City is a city in the Northern region of Amestris and serves as the State Military command center for the area. Located to the south of the Briggs Mountain Range, North City is a picturesque town blanketed in snow for much of the year, belying the fact that the sinister dealings of Central Command have taken deep roots there. As the crucial Fort Briggs is rather difficult to achieve by normal means of transportation, military personnel attempting to make contact with the fort must first stop at North HQ and either take the main road on foot or await official escort from Briggs itself.

When Colonel Roy Mustang's team is forcibly disbanded by the Führer, in Chapter 52, Warrant Officer Vato Falman is assigned to North City Headquarters and given a promotion to Second Lieutenant before being once again shunted to Fort Briggs. Also, North HQ is ordered to follow the commands of special agent Solf Kimblee as he attempts to track down the serial murderer known as "Scar" and his cohort, the fugitive Tim Marcoh. After Kimblee causes an explosion in the Baschool mines, Edward Elric is ferreted to a small North City clinic by the Human Chimeras Heinkel and Darius to recover from his injuries. When North Area troops track them down, however, the trio are forced to flee.

Retrieved from "https://fma.fandom.com/wiki/North_City?oldid=63789"
Community content is available under CC-BY-SA unless otherwise noted.