By the time Colonel Roy Mustang is transferred from Eastern Headquarters to Central Command, Lieutenant General Grumman allows him to take a team of loyal subordinates with him to carry out his plans at Central.

This unit consists of five members, each one with specific abilities and roles. Throughout the series, they work together and create, as was stated by Hiromu Arakawa, close bonds, essentially forming a family amongst themselves. 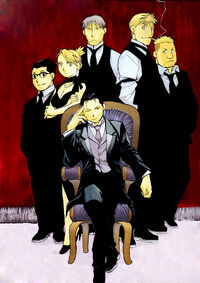 From left to right:

Kain Fuery (Mechanics and Communication Specialist) - A young sergeant, Kain is uncommonly gentle and a helpful soldier, always willing to aid his peers and, most of all, younger and lower soldiers. A "tech geek" and communications guru, he sometimes states he had the luck to make his hobby become his job. He is the sole enlisted member of the unit as well as its youngest and smallest member.

Riza Hawkeye (Adjutant) - The sole female in the unit, Riza is the only member apart from Mustang who has seen combat prior to the series, having taking part in the Ishval Civil War. Riza is a weapons specialist whose job lies in parallel with the unit's hierarchy. She answers to Mustang alone and works as his secretary, bodyguard and personal aide. She is the only member of the unit who was acquainted with the colonel prior to the war in Ishval, and the two have known each other for most of their lives. Considered to be one of the top sharpshooters in the State Military, Riza is highly regarded for her serious demeanor and discipline, though sometimes it makes her seem unapproachable and aloof. Contrary to that image, however, those close to her enjoy teasing with her temperament and often state that she is a lot sweeter than she seems. She is the highest ranked subordinate in Mustang's unit, being a first lieutenant. She is also the owner of Black Hayate, a faithful dog who is unofficially part of the unit.

Vato Falman (Information Specialist) - Vato is a warrant officer who specializes in intelligence. He has extraordinary memory and knowledge, especially in history. His job is mostly connected to office work and he rarely participates in field missions. However, his information is most of the time proven to be valuable, and highly necessary to the unit's work.

Jean Havoc (Officer-in-Charge) - Jean is a regular, but capable soldier. Not particularly gifted in any field, he compensates for his lack of natural talent with dedication and effort. His character and loyalty have been proven to Mustang beyond the shadow of a doubt and, therefore, he has been made the Officer-in-Chief of Mustang's Unit, coordinating the work of Breda, Falman and Fuery (but not Hawkeye). Although he has no combat experience, Havoc is the most efficient officer in field missions after Hawkeye.

Heymans Breda (Investigation Specialist) - A extremely talented soldier, Heymans graduated at the top of his class (Havoc was his classmate in the Academy) and is specialized in all sorts of information gathering, especially those that require travel and speaking different languages. His unimpressive appearance allows him to pass by unnoticed (or underestimated) by most military personnel, a trait he uses to his advantage in stealth missions.

Roy Mustang (Unit Commander) - The commanding officer of the unit, Roy Mustang is a State Alchemist and holds the rank of colonel during most the series. While stationed at the Eastern Headquarters, he was responsible for all administrative chores of that HQ, which were passed on to him by the commanding officer, Gen. Grumman. After the series concludes, he returns to the Eastern Headquarters, this time holding the position formerly occupied by Grumman himself, as the stars on his epaulettes indicate that he has been promoted to general.

In Chapter 62 of the manga Roy Mustang states a metaphoric relation between each of his subordinates (and, consequentially, himself) to chess pieces. He says he “has lost his pieces”, as if he was actually playing a chess game against the Homunculi and the military top brass. Interestingly enough, this metaphor is not randomly put, as the pieces of chess mirror each subordinate’s character, personality, role inside the unit and, perhaps most of all, his or her relationship with Mustang.

Roy Mustang is represented as the King. In chess, the king is the fundamental piece and represents the center of the game. It cannot be exchanged and one cannot attribute a value to it, since it would be infinite. The king is the only piece that cannot be played without and its loss represents the end of the game. A king can move to one empty or enemy-occupied square in any direction (horizontally, vertically, or diagonally) unless such a move would place the king in check. This means that the king cannot sacrifice himself and that one king cannot directly kill the opposing king. It can, however, be used in conjunction with other pieces to create a checkmate scenario. The king is commonly used as a symbol of wisdom, leadership and power.

Riza Hawkeye is related to the Queen. The only unique piece in the board besides the king, the queen can be moved any number of unoccupied squares in a straight line vertically, horizontally, or diagonally, thus combining the moves of the rook and bishop. It is the most versatile piece on the board and the one with the highest relative value. Being one of the most protected pieces, a queen's loss has grave consequences, a direct parallel to the importance Colonel Mustang attributes to the lieutenant.

In modern times, the queen is the only female piece on the chess board but in ancient times, the queen used to be a “male” piece called the "Counselor" (Ferz), reinforcing its characteristics of being the one closest to the king and its importance as the king’s guardian and advisor. This is another characteristic that can be used to define the role of Hawkeye and her relationship to Mustang. She is often seen being his voice of reason or discipline, and is occasionally the only person to whom he will listen. The queen is regarded as a symbol of purity, clearness of mind, and of conscientious decision for starting the game in the house of its own color: White Queen in the white square and Black Queen in the black square (the expression "The Queen gets her color" comes from this rule) – as well as for being the "King’s ferz".

The fact that Mustang refers to Hawkeye as “his queen” reinforces the common belief of them being a romantic pairing. It is further noted that when Mustang plays chess, he never sacrifices his queen if he can possibly help it, which also parallels Hawkeye's relation with that rank. As much as he goes to great lengths in a regular chess game to retain that particular piece, he is shown more than once to rush into action when "his queen" is endangered.

Jean Havoc is represented as the Knight. It is one of the most agile pieces of the chess board and is the only piece that can “jump over” other pieces to its destination square, regardless if the destination square is empty or enemy-occupied.

This piece is always in the center of action and is more powerful when located close to the center of the board which mirrors Havoc, as he is always taking part in the action during missions. It is usually one of the first pieces to be played in game and represents both strength and impulse to action. The combination of the queen and a knight is also considered one of the most powerful in chess, a good parallel to Mustang's common strategy of using Hawkeye and Havoc in the field together and his belief that this pair is his "most effective combination".

Vato Falman is represented as the Bishop. The bishop moves in diagonals, requiring great skill to use. Each bishop can only access half the squares of the board, which is an interesting parallel to Falman’s lack of ability in the field. Opposite to the knight, the bishop is more powerful the farthest it is from the center of the board, which is also a good parallel to Falman’s supportive role during missions.

It symbolically represents the control of one's feelings and not letting emotions get one "sidetracked", which can be related to Falman’s ability to acquire privileged information and “saving the unit’s time”.

Heymans Breda is represented as the Rook. The rook is a very sturdy, strong piece, moving horizontally or vertically, forward or backward, through any number of unoccupied squares. It is usually a piece players don’t move during the early stages of the game, but once the first rows from the board are clear (meaning, after the attack strategy is in place), becomes very powerful and with great ability to threaten the opponent’s pieces, not allowing them to move.

Like Breda, the rook usually plays a supportive role in chess, protecting the king while stronger/more active pieces like the queen and the knight attack the opponent. But it also can take the main floor of the board as a substitute to a bishop or even the queen, mirroring Breda’s capacities for both gathering information like Falman and operative jobs usually done by Hawkeye.

Kain Fuery is represented as the Pawn. The pawn is a very different piece on the chess board. Unlike all the other pieces, pawns may not move backwards and they capture in a different way than they move. It moves only forward one square at a time (except for their first move, where the pawn can move two squares), but captures in diagonal squares.

Like Fuery, the pawn is a very altruistic sort of piece, working to protect and aid those that are at his side. Attacking diagonally, they mirror the works of a soldier in a phalanx whose shield protected the soldier to their left and not themselves. Its usual task is to provide assistance to other pieces, protecting them while they attack. They are also the pieces that prepare the field for the other pieces' strategies to take place.

Retrieved from "https://fma.fandom.com/wiki/Mustang_Unit?oldid=62904"
Community content is available under CC-BY-SA unless otherwise noted.