Reclamation and restoration of the former country of Milos, prosperity for its citizens

Maaya Sakamoto
Julia Crichton is a character and the tritagonist in the movie Fullmetal Alchemist: The Sacred Star of Milos. She was featured on the front page of the movie website, holding a rifle and wearing Edward Elric's red jacket. Julia is seen again in the third teaser trailer, wearing a belted jacket and red headband and firing a similar weapon. Julia is a descendant of Milos, and is the younger sister of Ashleigh Crichton.

Part in the Story

This page is a Stub.

Please help by contributing your knowledge of Julia Crichton, and to help improve the Fullmetal Alchemist Wiki.

Julia is a kind, strong-willed young woman who would do anything to restore the former glory of her nation, and desperately seeks great power to do so. She, however, disapproves of anything that is immoral and unethical such as sacrificing humans for the Philosopher's Stone. She dearly loves her brother Ashleigh and seeks nothing more than to be with him after the conflict, and fights him, albeit reluctantly.

Julia's signature alchemy revolves on healing. She's capable albeit with some difficulty to heal small wounds. The transmutation circle used for this is imprinted on paper and is composed of two greater circles, one small circle in the center with a spiral. From the middle circle, 3 ovals with a line in the middle are imprinted, one of them with 3 additional circles within and one of them with the same spiral, with the outer rings of the transmutation circle, enveloping a triangle with two circles in one point.

While in the possession of the Philosopher's Stone, she can perform incredibly powerful alchemy. Similar to Atlas, she can release lightning albeit far more powerful than his as well as using water and ice. Also she, with much effort, is able to manipulate large portions of the Earth to stop flowing magma that even Al could not stop with walls. Her healing ability is also greatly enhanced to the point Ashleigh's ripped skin was repaired. After losing the stone and passing through the gate of truth to save the life of her brother, Julia presumably gained the ability to use alchemy without the use of transmutation circles at the end of the movie, though it is never demonstrated.

Contrary to appearances she's quite athletic and could easily jump out of a building with careful but fast acrobatic jumping in lower floors, to ensure a safe landing. She also knows how to wield and shoot a rifle and other firearms with relative proficiency, as well as use the equipment of the Black Bats to fly.

Julia as a Child during a flashback in the first scene of the Film.

Julia with the Star Consumed. 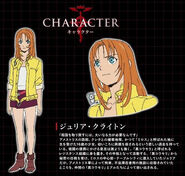 A Bio page of Julia in Japanese, with Full-Body and Facial Artwork.
Polski
Community content is available under CC-BY-SA unless otherwise noted.
Advertisement