The term Ishvalan イシュヴァール人, Ishubārujin (also spelled "Ishbalan") refers to the indigenous people of the nation called Ishval, which would come to be a region in the southeastern area of greater Amestris. The Ishvalans are an ethno-religious group identified by their ethnicity but unified by common religious beliefs. Although they are usually characterized by brown skin and white or silver hair, Ishvalan people are most definitively distinguished by their red eyes, which persist as a dominant genetic trait regardless of whether or not Ishvalans marry outside of their ethnicity, as seen in the case of Miles whose Ishavalan traits were directly inherited from his grandfather. In the 2003 anime series, only Scar and the older Ishvalans have white or silver hair; the children and many others have dark hair instead. In the 2009 anime series, all Ishvalans are portrayed with white hair regardless of age). 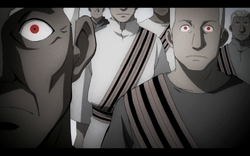 The culture of the Ishvalan people is steeped heavily in their religious ideology and traditionalism, which marks the earth god Ishvala as the sole true god and lord of all creation. They are called to pray fervently to Ishvala in groups and live lives of simplicity and righteous piety as part of their religious creed, as it has been passed down through prophets like Logue Lowe. It is likely that the Ishvalans' strict code of religious conduct and discipline was borne from the severity of the land, which is not largely farmable and contains very few natural resources, if any. Ishvalans consider their names sacred, as gifts from God, and usually wear sashes striped with burgundy and gold, presumably as a sign of their faith. In accordance with their value of discipline, Ishvalan monks are also heavily trained in melee combat, presumably as a sort of meditative discipline, and are comparable on the battlefield to roughly ten standard soldiers. However, the most contentious point of the Ishvalan religion is its rejection of the craft of alchemy, considering it a practice based in sacrilegious hubris, perverting the natural creations of Ishvala into unnatural forms and thereby suggesting that human hands are more capable this belief was later changed by scar. In the 2003 anime series, alchemy is so hated by the Ishvalan people that those among them found practicing it are exiled from their community and branded with a mark of shame that prohibits faithful Ishvalans from interacting with them.

As a part of the annexation of Ishval, Ishvalans became normalized Amestrian citizens by law, allowing to practice their religion in keeping with Amestris' civil rights laws, able to participate in national practices as citizens as well as enlist in the State Military, but their radical cultural differences - particularly their aversion to alchemy - would put them at odds with the rest of the Amestrian population until tensions on both sides culminated in the Ishval Civil War in 1901. After seven years of constant fighting and stalemate conflicts, the Führer of Amestris ordered that the Ishvalan race be completely eradicated by a new force with State Alchemists at the vanguard. By the end of the bloody struggle, the Ishvalan people had nearly died out, with refugees scattering to slums all over the country as well as places outside the border, such as the ruins of Xerxes. As a result, Ishvalans have become a focus of discrimination, fear and pity among the greater Amestrian population and have fallen below even second-class citizen status.

At the end of the manga storyline, however, Ishvalan refugees are granted amnesty and allowed to return to their holy homeland. In addition, an active mission to re-establish Ishvalan culture is headed by Major Miles and Scar (possibly as the new Grand Cleric) under the command of Brigadier General Roy Mustang. At the end of the 2003 anime storyline, the Ishvalan people are mentioned by Sheska in a letter to Winry Rockbell during the series epilogue that after Amestris' government had reformed they allowed the Ishvalan people to return to their homeland, and are aiding them in rebuilding their homes.