At the end of the last episode of Fullmetal Alchemist: Brotherhood, an announcement was made declaring that a Brotherhood movie had been green-lit and would be coming to Japanese theaters at some point in the near future. On November 14, 2010, the movie website launched a teaser trailer stating that the movie's title would be Fullmetal Alchemist: Milos no Seinaru Hoshi and that it would be released in the summer of 2011. The film appears to take place in the middle of Episode 21 of Brotherhood (as Alphonse is able to transmute without a transmutation circle and Mustang's subordinates have not yet been split up by Führer Bradley, while Edward has not yet visited Xerxes). It involves movie-only characters and an original story, including Werewolf chimeras, an army of winged soldiers named the Black Bats, an alchemist with talent in water transmutations, and a mysterious castle named Table City. The film, contrary to many rumors, is animated and not live-action.

By the style of the film's visuals, it is a definite departure from the style of both anime series and the manga. The colors are sharper with a lack of shading on character models. The eyes are rarely shaded, and are only accentuated by small details of lighter hues. The style and color of Riza Hawkeye's eye is slightly different, the shape of Roy Mustang's eyes are different as well, Edward Elric's hair is usually outlined with a similar color of blond, but it is outlined with black similar to the first series of the Fullmetal Alchemist, and there are no "sharp edges" as the ends of everyone's hair is curved, giving it a blunt look. The animation is also much simpler and the frame rate is visible to the naked eye.

The story begins with the Crichton family being chased from their homeland and into Creta, where Julia is orphaned when her family is brutally murdered.

Back in Amestris, an alchemic prison break by Melvin Voyager, who was a few months shy of his parole, has the Amestrian military confused until they discover a newspaper that has had something removed. Cue clue #1. The removed piece is actually a photograph of an older Julia Crichton being arrested by military police. Further investigation reveals that she's being detained in Table City, which lies on the border between Creta and Amestris in the Western region, and so Edward and Alphonse are sent out by Colonel Mustang to investigate.

While en route via train, the train is attacked by wolf chimeras, and while Ed is fighting on top of the train, it's once again attacked by a glider-riding group calling themselves the Black Bats. The train goes out of control, and despite their best efforts to stop it, it slams into the station.

Once in Table City, Ed and Al are just in time to witness Julia's prison break, and get pulled into a battle between Melvin Voyager (who was on the train) and the Bats. Ed and Al are separated when Al attempts to save Julia from falling, but ends up following her right off the cliff into the valley below, with Melvin on their heels.

She, Melvin, and Al are helped by the people who live in the bottom of the valley and it's revealed that not only is Julia the leader of their resistance force and the Bats, but they're searching for something, something Ed and Al know quite well: the Philosopher's Stone. Only they call it something else, because it's just as shrouded in myths and stories in Milos as it is in Amestris. Apparently the people of the valley are all that is left of the people of Milos. When It was discovered that the Philosopher's Stone was said to appear in the city in random locations, Creta wanted it so they took control of the city and enslaved the people to find the stones. Shortly thereafter, Amestris stepped in and pushed Creta out... but still enslaved the people.

Meanwhile, Ed manages to get into the valley and locates Al who is with Julia and Melvin, only to discover they've been followed. A chimera attacks, Melvin's reason behind his jailbreak is uncovered, and the Elrics say their temporary farewells while Julia preps the Bats for combat in hopes of freeing Milos from its military occupation.

While all of this is going on, Colonel Mustang, Lieutenant Hawkeye, Winry Rockbell, and handful of troops enter the city as the Bats' attack is underway. Despite all of her best efforts, Julia's main assault fails and another Philosopher's Stone is born.

The villain of the story - the one who murdered the Crighton family - appears, and Julia takes matters into her own hands despite the fact that Ed and Al are constantly trying to dissuade her, ingesting the Philosopher's Stone and using its power against her enemy. There's also a "cameo" appearance by Roy and Riza, though they don't do much, and with good reason as the movie takes place around episode 20 of Brotherhood and Roy hasn't healed from his battle with Lust yet. Eventually, the city is liberated from its military occupation, the people from the valley rising up to take control, declaring the city of Milos to be its own nation, and those from Amestris head back to their own country to take care of the paperwork while the Elrics stick around a little longer before they, too, head off.

The final scene is of them on the train as Table City, now Milos, disappears from view behind the mountains. 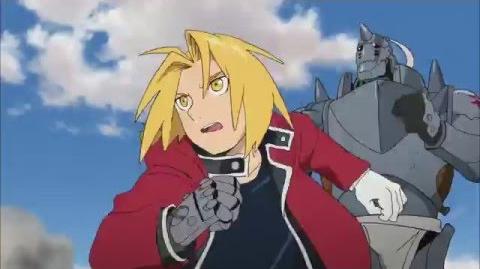 Retrieved from "https://fma.fandom.com/wiki/Fullmetal_Alchemist:_The_Sacred_Star_of_Milos?oldid=64950"
Community content is available under CC-BY-SA unless otherwise noted.