To mantain his actual status

Bonus Chapter: Prince of the Dawn—Prologue

While both of these games have been released in Japan, they have not been released elsewhere. He also appears in two bonus chapters of the manga released in volumes 23 and 24 of the tankobon, which serve as prologues to each game.

His part in the Story

Bonus Chapter: Prince of the Dawn—Prologue

Claudio Rico is the crown prince of the nation of Aerugo, Amestris' neighbor to the south with whom they have been in a state of war for an unspecified length of time. When a ceasefire between the nations is agreed upon, Prince Claudio arrives in Central with several officers of his military to negotiate a peace settlement. However, there are hints in the prologue that Claudio is pursuing some hidden agenda of his own, with his vow to "fulfill his oath" in the Dusk prologue and his statement that "there is no escape" in the Dawn prologue.

Fullmetal Alchemist: Prince of the Dawn

In the first game, he frequently comes across Edward Elric, while Edward watches Claudio in a massive parade, at an automail competition where Edward is acting on Winry's behalf, and when Edward and Roy Mustang are using their alchemy in a mock battle. During the mock battle, an explosion goes off near the stand holding Claudio's seating area, which is framed as being an assassination attempt by Roy Mustang and leads to his imprisonment. Edward Elric is later imprisoned for attempting to prove Mustang's innocence before the two are later broken out of prison with help from allies. This first portion of the story appears to end when Lt Hawkeye, acting on orders from Fuhrer Bradley, attempts to assassinate the Prince, only to have Edward rush forward to use his own body to shield the Aerugo royal.

Fullmetal Alchemist: Daughter of the Dusk

After the assassination attempt is foiled, Claudio is escorted to safety. Roy Mustang and his allies try to convince the Prince to not attend the renewed ceasefire treaty ceremony due to possible danger, but the Prince remained undeterred and proclaimed he would attend the ceremony anyway. It is later discovered by Roy Mustang that Claudio is not the real prince of Aerugo, but a dangerous terrorist with the same name who captured the true elderly prince and masqueraded in his stead and escaped when discovered. Claudio's sister Elena later reveals his origins and Claudio's true plan for Amestris.

Claudio and Elena were once citizens of Aerugo whose parents were killed during the border skirmishes between Aerugo and the Amestrian Military, leaving them orphaned and poor on the streets of their hometown. Desiring revenge against Amestris, Claudio took an oath to destroy Amestris as it destroyed his parents and worked in the Aerugorian criminal underworld, working his way up to become a prominent and dangerous mobster. At some point, he managed to capture the true ruler of Aerugo and masqueraded in his stead with his forces to travel to Amestris for a staged Ceasefire Ceremony to destroy Central City from within. Elena traveled to Amestris in the hope of stopping her brother, but was unsuccessful.

Elena leaves Ed and Al and returns to Claudio to convince him to stop his plans, but Claudio tricks Elena and uses her soul using an alchemic symbol implanted on her chest to power a giant Mecha built by Claudio's ally Petr Hildebrand to destroy Central City. Claudio is confronted by Edward Elric, and the two battle as Edward's allies disable the rampaging Mecha. The Mecha is stopped, and Ed saves Elena as the Mecha collapses, but Elena is stuck in a near death state due to her soul being trapped in The Gate. As a final show of remorse, Claudio decides to use Alchemy to bring back Elena's soul by using his own body and soul to open the Gate to retrieve it. However, as payment demanded by The Truth for Elena's soul, Claudio disappears into the gate forever, wishing his sister well before being taken into the gate. 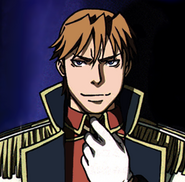