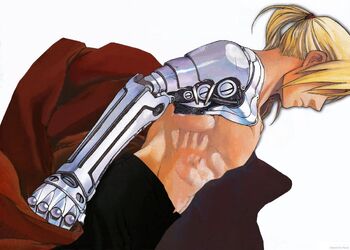 "Automail" (, Ōtomeiru, Japanese kanji lit. Mechanical Armor) is the common term for automotive armored prostheses as used in the Fullmetal Alchemist universe. Originally devised as a sort of motorized battle armor (according to the "Alchemists vs. Homunculi" OVA), automail eventually became advanced enough to double as prosthetic body parts for amputees desiring something more versatile than normal prosthetic limbs.

Linked directly to the nervous system, an automail prosthesis does not usually require an external energy source, and can be moved at will like a natural appendage, taking electrical pulses from the nerves to power and regulate the various electric motors and pneumatic actuators inside. Automail limbs are generally made with a full steel skeletal frame layered with steel armor-plating to protect the various wires and intricate machinery inside; however, contemporary technological advancements have allowed certain automails to be comprised of other materials such as carbon fiber, fiberglass, chrome, copper-nickel and aluminum alloys, so as to be less cumbersome and more durable than steel in abnormal conditions.

Though arguably useful, the set of drawbacks unique to automotive prostheses is enough that many are loath to undergo the upgrade from standard prosthetic attachments. The installation process, which requires a specialist in bio-mechanical engineering (that is to say, both advanced mechanical engineering and surgical medicine), is understandably expensive and notably painful, as certain body parts must often be further amputated in order to accommodate new automails properly and the sensitive nervous system registers all types of over-stimulation involved as intense pain. Those receiving automail for the first time must also have each nerve painfully connected to a permanent housing system on the body, as well as have all the nerves connected simultaneously when the limb is later attached to the housing system. The recovery from surgery, including the period of time necessary to fully master the use of automail limbs, is noted to take roughly three years on average (though full recoveries lasting as short as one year have been documented, such as Edward Elric's, and a recovery period as short as six months was stated as a possibility but was not confirmed) and even after such time, automail prostheses must be meticulously maintained with regular oiling and frequent overhauls which necessitate that the automotive parts be disconnected from and then painfully reconnected to the nervous system in order to remain in proper working order.

Like wearers of normal prostheses, automail users are subject to various aches and pains resulting from drastic changes in barometric pressure, however another drawback to full steel limbs are the adverse effects which occur in extreme conditions such as heat and cold. In extremely high temperatures, the metals - which conduct and retain heat, induce great deals of discomfort to the user, who must remain with a heated metal object grafted to the skin; and in extremely cold temperatures, the cold conducting metals cause standard oils to cease functioning as well as expedite frostbite damage to the connecting tissue.

A lesser documented setback, mentioned by engineer Dominic LeCoulte, is that automails put a large strain on the users' physical development which impedes growth.

Though automails are generally used as an advanced medical tool to facilitate the lives of amputees, within the country of Amestris (which has seen a significant rise in automail usage in its past two decades of constant, successive wars), automail has developed into a venue for weapons development as well, resulting in "combat automail". Using various techniques, these machines, previously used only for movement, have begun to incorporate armaments such as diamond-tipped claws, hidden blades and even firearms, sometimes willingly at the expense of normal limb functionality. As such, there has also been a rise in the number of fanatical automail hobbyists who willingly sacrifice flesh-and-blood body parts by way of operation in order to obtain weaponized combat automail appendages.

While implausible, it also appears that such things as "full-body" automails exist, taking the place of vital organs and sometimes comprising half or more of the body's shape and/or normal functions. However, this is only shown in the 2003 anime and alluded to in the manga.