Alexander was the family pet of the Tucker Family and Nina's closest best friend. His breed appears to be a Great Pyrenees and his fur is mostly white but Nina notably depicted him with brown patches on his head and ears whenever she drew pictures of him with herself and her father or the Elrics in the 2003 Anime. Nina tended not to keep Alexander tied up for which her father scolded her in the 2009 Anime.

In the manga and 2009 Anime, Alexander continued to jump on Ed until Ed raged at him and thereafter, tended to call him a "mangy mutt".

Despite his large size and loud bark, Alexander was generally very friendly and playful and was seldom seen without Nina, such as the bond they shared and the fact that they often only had each other for company as Nina's father became increasingly preoccupied with his alchemy research.

In the manga and both Animes, Alexander and Nina grow very close to the Elric brothers, but their friendship was not able to last as Shou Tucker needed to present an astounding alchemic breakthrough to the military to make up for his past failures and avoid having his license revoked. Desperate, Tucker resorts to transmuting Alexander and Nina together to create a talking (yet imperfect)

Chimera. When the Elric brothers discover this, Edward beats Shou to near death for having done such a cruel thing. With no idea on how to restore Nina and Alexander, the brothers leave the rest in the hands of the military, but the State Alchemist killer Scar soon arrives and kills Nina's father, and, noticing the pain the Nina/Alexander chimera is in, kills it in an act of mercy in the Manga and 2009 Anime.

In the 2003 Anime, after Edward passes his State Alchemy exam, Alexander annoys him by snatching his pocket watch and running away with it. Later, Alexander pesters Ed to take him for a walk when they come across a burned family portrait that Nina had drawn with the intention of sending it to her mother which causes Ed to grow suspicious of Tucker's first chimera.

It transpires that Brigadier General Basque Grand had been privy to Shou's secret experiments and known the truth about Sewing-Life's wife and he collects the Nina/Alexander chimera for studying and creating chimera soldiers from Sewing-Life's research. The Nina/Alexander chimera escapes from custody with help from Edward, but runs away when he calls out to it. The chimera runs into an alley and encounters Scar. Realizing what the Nina/Alexander Chimera is and that the poor creature is in so much pain, Scar uses his alchemical tattoo to ultimately deconstruct Nina/Alexander before Edward can catch up. Rather than dying more-or-less peacefully at home, as in the manga and 2009 anime, the 2003 anime has Nina/Alexander completely blown apart, leaving almost nothing but large bloodstains on the walls and street. When Edward and Alphonse find Nina/Alexander's remains, a horrified Edward apologizes for what has happened and starts to mourn.

Later in the series, it becomes apparent that Tucker has survived in custody and made attempts to revive Nina by using her remains to clone her a body and filtering out the contamination from Alexander's DNA by siphoning it into his own body and becoming a grotesque Human Chimera himself. Tucker does not attempt to revive Alexander but after recreating Nina as a lifeless doll, he calls out for Alexander having become completely deranged.

Several scenes depicting Alexander with Nina and the Elric brothers appear in the end credits of Episode 7. 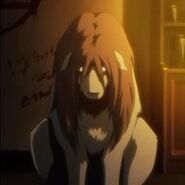 Alexander's appearance in the 2003 Anime after being fused with Nina.

In Memoriam
Community content is available under CC-BY-SA unless otherwise noted.
Advertisement