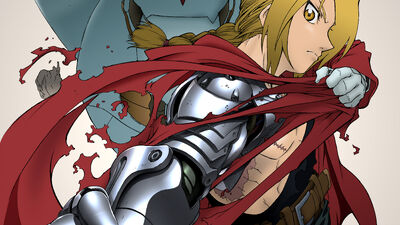 I saw the original Fullmetal Alchemist years ago. It is definitely one of the better animes in my book.

Just recently I started Fullmetal Alchemist: Brotherhood, I just got to Greed's death episode and Father's introduction (Episode 14). I've noticed many similarities (like the Cornello and Tucker episodes) and many differences (like Fuhrer King Bradley is Wrath where in the original he was Pride, and Sloth is quite different, and no idea what Pride will be like, and of course an entirely different main villain, not to mention revealing Bradley's true identity and the main villain much earlier, also Grand doesn't seem to be a villain here and the Homunculus have different origins).

It's still too early in to tell which I like better, though some of the Brotherhood episodes are a little slow, but it has picked up with the two-episode Greed arc, and I still have yet to see the other six Homunculus and Father be defeated (well, I already saw Lust's death scene on WatchMojo but I'm trying to keep everything else a surprise), as well as where they go with Scar, not to mention Barry and Yoki, and how/if Al gets his body back.

And I might think about rewatching original series when I'm done.

So which do you think is better - original anime or Brotherhood?

The main rule of this post: Do NOT be mean to someone for feeling differently than you. If you prefer one, don't think someone is stupid for liking the other. Don't hate on them for liking one you dislike, or vice versa. Just say which you prefer and why, and maybe say other good points about the other, or even politely say what you disliked about the other.

So in the original series, the Homunculus are not part of the main villain's soul driven out, but created when someone tries to bring someone back from the dead with alchemy. (Like Sloth was created when Ed and Al tried to revive their mother, Wrath when Izumi tried to revive her son, etc.)

So there are seven Homunculus, why? Because seven resurrections were attempted. Two of them in the course of the show.

Here's the thing - each is named after one of the Seven Deadly Sins, and conveniently there have been precisely seven Homunculus, one named for each of them.

So, if an eighth Homunculus had been created from another attempted resurrection, what would he or she have been called? Since all seven names in the naming scheme were already taken? Would it be like an Envy Jr. or something, or maybe named for Four Horsemen next?

I absolutely ﻿adored ﻿the FMA '03 ending.

It was so bittersweet and poetic. It reflected the problems of the real world perfectly. The ending left me thinking about the series for days.

I think the reason so many people hate the ending is because they wanted the Elric brothers to have a happier ending. But like Al said, the world isn't perfect, and not everything will turn out the way you think. It is a beautiful reflection of the real world, and some people don't want to accept that some things will turn out badly.

And Al's last words of the series were the saddest thing ever:

"I don't think of equivalent exchange as a law of the world anymore. I think of it as a promise between my brother and me. A promise that some day, we'll see each other again."